The best robot vacuum is what we all want. Is this a contender?

You’ve probably heard of iRobot. But how about Ecovacs? No? Me neither, until I got my hands on the Deebot D45, a robotic floor vacuum.  So what did I think? This might be a good time to learn about robot vacuums/mops for Hardwood Floors and What to Look for When Buying the Best Robot Vacuum and Mop.

Continue reading my Deebot D45 review to find out. Or, take a look at the iRobot Braava 380t advanced robot mop review if you’re looking to mop hardwood instead.

Summary: An entry-level robotic that is effective at keeping hardwood floors clean of debris, dirt, and pet hair. However, it’s not the smartest.

The D45 comes fully assembled, almost.  Included in the box or 4 side sweepers, two of which you’ll have to snap into place. 2 are for backup as they can come loose or ostensibly break down over time. These are great for sweeping up in corners or other areas the Deebot D45’s body can’t slip into – its height is 3.15″, so anything lower and it won’t go. If you need a less advanced vacuum at a discounted price, read our review on the Dyson V6 vacuum with a giant 60% off labor day sale.

You’ll also need to install the battery, which is fairly straightforward and self-explanatory.  What is less evident, is how to install the dustbin. The hinge for the handle, which allows you to more easily remove it from the D45, needs to slip into a set of designated grooves.  If not done correctly, the Deebot D45 won’t function and will emit an obnoxious “fix me” like tone.

That said, the dustbin is made up of a few parts, including a foam filter for catching smaller debris and an air filter. Lastly, there is a microfiber cloth that sticks to a plate that snaps into the back underside of the Deebot D45.

To charge the Deebot D45, at least initially, you’ll just need to place the vacuum on the base station. It charges via two contact points. If not aligned correctly, which is to say the two contacts aren’t lined up correctly, the D45 won’t charge. In my instance, I manually placed the D45 on the base station for an initial charge. If done correctly, the Auto Button, found on the top of the D45 (it’s the only button) will alternate blue and red to indicate charging.  Ecovacs suggests that you place the base station against a wall and ensure there is nothing 4-5 feet in front of it or anything 1.5 feet to the left or right of it. This reduces any confusion the D45 will have locating its home.

The D45 is controlled via a fairly basic control.  It doesn’t feel or look premium, but it works.  It functions via infrared, which means you’ll need some sort of line of sight to the D45 to control it. But despite this, its range and sensitivity are quite good as I was able to control the D45 without pointing the remote directly at it, sometimes even controlling it around corners. How, I don’t know, but I supposed the signal is able to bounce off the surrounding.

The remote includes a set of manual controls, allowing you to drive the D45 where you see fit, albeit without the brushes and suction activated.  There is also a pause button.   At the top of the remote are a set of controls, which activate a daily cleaning function, spot cleaning for heavily soiled areas, a home button (to send it to the base station) and a button to clean just the circumference (or edges) of the room.

To activate the daily cleaning feature, just hit the appropriate button (the one that looks like a circle) once, or the auto button twice, at the time of day you’d like the Deebot D45 to schedule cleaning. If done correctly, the D45 will clean at the same time every day (effectively a 24-hour countdown timer). And lastly, that Auto button, just hit that when you want the Deebot D45 to clean your floors. I usually end up using this function as I don’t need the Deebot D45 to clean my living room and kitchen’s hardwood floors daily.

Like the Deebot D45, our review of the Goovi 1600PA robotic vacuum cleaner demonstrates another vacuum that performs just as well.

For those with stairs, worry not. As the Deebot D45 is excellent at detecting them and avoiding what could be a fatal tumble. However, be careful.  If you hit the home button, the D45 won’t detect stairs, and as I experienced, will drive off the edge.

In short, none. You can’t control the Deebot D45 with a smartphone and nor does it tie into Apple’s HomeKit. Dyson’s robovac will offer this, as does iRobot’s.

As mentioned, I tend to use the Auto function. Largely because I don’t feel it necessary to clean my floors every day. Though, I suppose it wouldn’t hurt to do so. Once activated the Deebot D45 will leave its base station, begin to rotate its corner brushes and activate its suction.

Now, what makes the Deebot D45 interesting – I didn’t realize this at first – is that it uses direct suction. Which is to say, it doesn’t use a rolling brush to scoop up debris. The net result is arguable a less effective vacuum, but one that won’t get tangled over time from pet hair, human air and any other objects that are analogous to that. Also, since the Deebot D45 is designed for non-carpeted floors (hardwood, tile, etc) a rolling brush isn’t really necessary. Plus the corner brushes do a good job of tossing debris back to the suction area.

Ecovac’s website indicates that the Deebot D45 is capable of mopping floors. But if you think it’s anything like iRobot’s Scooba, think again. It’s merely a microfiber cloth that is adhered to the underbelly of the robot vacuum.  It’s placed on its rear, and if slightly wet, can mop, much like a Swiffer, after it’s sucked up crumbs, pet hair or dirt. It’s useful for spot cleaning, but by no means will replace a stand-alone mop.

Unfortunately, the biggest shortcoming of the Deebot D45 is its dustbin. In the hand it feels downright cheap – the plastic is flimsy and the hinges and latch feels as though it could break if put under repeated stress.  Moreover, the design is inherently flawed, as the bottom of it, where the suction forces in debris, is always open. So as you remove the dustbin it will drop its contents into the inside of the vacuum, provided you’re not extra careful.

However, despite the above, I’m fairly impressed with how much cleaner my living room and kitchen’s hard floors are. Using the Deebot D45 3-4 times a week has vastly reduced not only dust, but dirt on my hardwood floor. For example. Before the Deebot D45, and despite having a housekeeper come once a week, my floors would gather enough dirt and outdoor debris from shoes that bare feet would almost instantly turn black. But with the Deebot D45 running it’s almost hardly the case. Hardly because the D45 isn’t capable of a true mop.

The Deebot D45 won’t work with carpets as it doesn’t include a rotating suction brush, and instead uses direct suction. Unlike some of the leading self-propelled vacuums.

You’ll want to charge the Deebot D45 every day.  Which is to say you’ll want to leave it on its stand, as you would with any robotic vacuum, when not in use.  So with that in mind, it’s difficult to say how strong the battery is, but my living room and kitchen area (they’re attached) measures probably about 600 square feet, and the D45 has no problem covering that and returning home.

Be Careful of Cords

The Deebot D45 is not immune to cords. And yes, we all have them. But whatever you can do to mitigate, I suggest you do so. Otherwise, it will get stuck on them, or get its corner brushes jammed in them. This happened to me fairly consistently, resulting in me tracking down the missing brush and reattaching it. Oddly enough, it was always the right corner brush. Fortunately, the brushes come off and go back on with ease.

At this point, I couldn’t go back to living without a robot vacuum. And right now that vacuum is the Deebot D45 from Ecovacs. Unfortunately, my exposure to robotic vacuums is limited, but I’m fairly confident another robovac could accomplish the same thing. Nevertheless, at $219 it’s a tolerable price point for those looking to test the waters with a robotic vacuum. Just be warned that this is not a massively polished product that’s parts feel as though they’ll last the test of time. 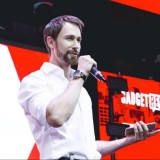 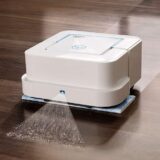 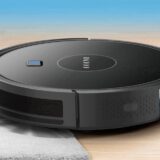 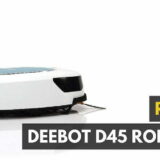 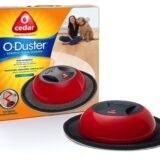 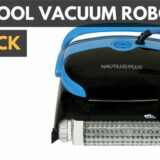 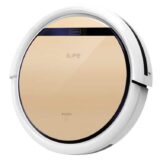