Pre-built gaming PCs live and die by their hardware—either the CPU is ahead of the GPU or vice versa. The CyberpowerPC Gamer Master GMA888A is one example of the CPU outperforming the GPU. But is it the best gaming PC? The AMD Ryzen 3 2300U is certainly ready for gaming, with beefy storage options to boot. 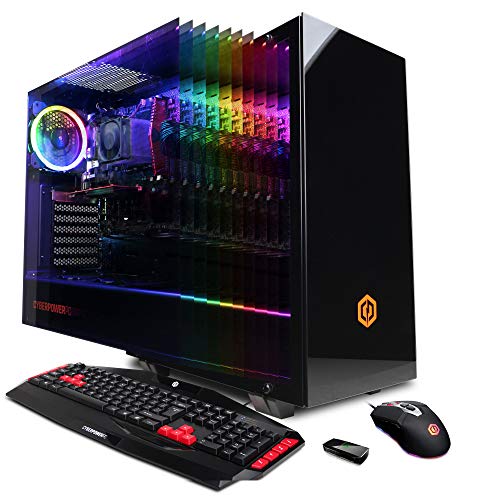 Why We Like It – CyberpowerPC Gamer Master GMA888A Review

A sleek tempered glass design hiding an SSD/HDD hybrid storage, with a great AMD Ryzen 3 2300U quad-core processor running the entire system and plenty of ports to use.

The CyberpowerPC Gamer Master GMA888A Gaming PC is a mixed bag of performance. This is due to its odd combination of CPU and GPU. The processor is great, fitting itself with the AMD Ryzen 3 2300U—though it’s a far cry from an Intel Core i5-9400F, seen in the CyberpowerPC Gamer Xtreme—it’s a solid start for a gaming rig.

The GPU, however, is an AMD Radeon R7 240 2GB. Quite frankly, that’s old. Rather than go with an 8GB DDR4 AMD Radeon R7 combo, graphics cards like the AMD Radeon RX 560 2GB would do okay. What this setup really needs is a high performance NVIDIA GeForce GTX 1060 Ti to really shine and push it further into a VR ready state; otherwise frequent bottleneck is inevitable.

Aside from the strange GPU/CPU combo, the design is rather sleek. The side panel is tempered glass as is the front of the case. Underneath its sleek design is a pretty good collection of ports. Along the top is 2x USB 3.1, a mic and headphones jack; 4 USB 3.1 ports and 2 USB 2.0 ports are in the back. You’ll find an 120GB SSD with a 1TB HDD hybrid. It has an RJ-45 network Ethernet, with 802.11AC Wi FI. It does not have an optical drive, like the SkyTech Blaze 2 Gaming PC, so make sure to pick up an external one ($20-30 in most cases).

So, is the CyberpowerPC Gaming PC AMD Ryzen 3 worth its asking price? After all, graphics AMD puts out are high-performing, too. For a gaming computer, the GMA888A Gaming PC AMD Ryzen 3 is starting to show its age, and that’s even considering the gaming keyboard, gaming mouse SSD WiFi Windows 10 Home blacking coloring and so on.

You could swap the GPU out for a GTX 1060 Ti, but you’re better off picking up a CyberpowerPC Gamer Xtreme, as it is superior all-around. It’ll handle PC games much better than the GMA888A. Better yet, if you have the budget, the iBUYPOWER Pro Gaming PC is an optimal choice.

The CyberpowerPC Gamer Master GMA888A takes a step in the right direction with the Ryzen 3 2300U for gaming, but takes a step back with the Radeon R7. Replace it ASAP; otherwise bottlenecks will be frequent. It takes another good step with its SSD/HDD hybrid storage, with an aesthetically pleasing design encasing everything inside.