Looking for a foldable bike you can carry with you, but don’t have too high a budget? Well, the Schwinn Loop Folding Bike is here for you at a very affordable price whilst still providing you with the flexibility of a folding bike and a comfortable riding experience. You also get 7 different speeds or rather gears to go through, thus adapting to both the city streets and some inclined roads. Tsus, paired with a luggage rack as well as a solid build, the Schwinn Loop Folding Bike might just be one of the best bikes you can get at this price range. 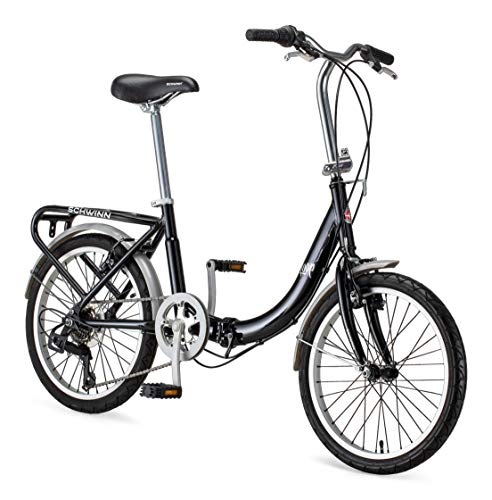 While other folding bikes are reaching over the top prices, Schwinn brings to you the Loop Folding Bike, a much affordable yet a very comfortable and durable ride. It comes with a completely foldable mechanism for the frame as well as the handlebars, making it easy for you to take it with you whether it’s on the subway or even a flight. Thus, paired with 7 gears to change through, the Schwinn Loop Folding Bike is among one of the best folding bikes you can get at this price.

With options like the SixThreeZero Bike and the Mongoose Dolomite Mountain bike there are many different bikes for many different purposes. But what they fall back on, is in terms of simple portability, or rather foldability. That’s where the Schwinn Loop Folding Bike comes in. At a much lower price than many other foldable bikes, this Schwinn Bike brings to you a 7-speed Shimano grip shifting capability as well as alloy made front and rear pull brakes to accelerate and stop whenever you need to. It performs almost on par with other road bikes, thanks to its 20-Inch alloy wheels which have 30 spokes preventing the rim from bending even during rough rides. Covering that, you get two semi smooth tires measuring to be 20 x 1.95 Inches which will make sure the bike has a solid grip even on paved surfaces.

Moreover, the Schwinn Folding Bike also includes a luggage rack as a part of its frame. While it can be helpful to carry stuff and even carry the bike itself when folded, the luggage rack actually comes with a fender covering the back tire protecting you from any mud, water or dirt that may come in your path. And, being a part of the frame also makes it much more durable than most other racks in similarly priced bikes. Aside from that, the seat on the Schwinn Loop Folding Bike is decent, and comfortable for short rides, but considering the price at which it is made, they aren’t the best out there.

Moving onto folding the bike itself, the Schwinn Loop actually uses a simple hinge near the crankset, on the frame’s main body. You will have to release a quick-release latch to pivot the frame on the hinge, and then fold it down inwards while also folding down the handlebars themselves. You can then easily collapse the seatpost into the frame to save more space, and this even helps with adjusting the height of the seat for the best riding experience. After that, you’re now done folding the Schwinn Loop Folding Bike, and although it has been reported as being slightly hard in certain reviews, with time you’ll get used to the process, and do it in a much faster time. You can then carry it with you wherever you go with the provided nylon carry bag, which can also be used as a storage bag. However, do keep in mind that unlike most other folding bikes, the Schwinn Loop Bike doesn’t come with anything to hold it together, so you might want to get some Velcro straps or a belt to hold it together when it is folded.

While this does make the Schwinn Loop Folding bike easy to take with you, it’s slightly heavier than other folding bikes with the weight being at around 33 pounds. This might seem hard to carry at first for many people, but you’ll get used to it soon enough, carrying it with you in the train or even flights. Other than that, with many of its components, including the pedals being made from plastic, they may not be the most durable but they will serve you well in terms of performance.

As a side note, before buying the bike you should take into consideration the limits on it, which stands at a rider weight limit of 230lbs and an advertised age range of 12 years. While the age range may not be important for most people, do consider the weight.

Measuring to have a folded size of 30 x 32 x 11 Inches, the Schwinn Loop is fairly easy to keep with you indoors and carry on the subway. You can get it in a number of colour options ranging from white, black, silver and some others and all of them have star patterned wheels. And with a simple set up process you can easily set it up once you get it, but if you do come across some form of difficulty or you think you will, you can also order to come fully assembled, which may however cause some issues during delivery.

Apart from that, it has a pretty solid build for the price even though some components like the pedals are made from plastic, but if you do need a more rideable bike for some rough use, the Tommaso Bike might be the option for you. You can even opt for the Mongoose Dolomite bike if you intend to ride up and down a mountain.

Priced at around $230, the Schwinn Loop Folding Bike is among one of the most affordable bikes you can get right now, that too in a good condition. It is much cheaper than most other folding bikes, many of which range around $1000. But with such a great price cut, you will have to make some compromises, namely a less durable build with plastic components and nothing to hold the bike together when folded. But, if you’re someone who wants a folding bike, but can’t spend as much, Schwinn Loop Folding Bike is an amazing choice at a great price, with compromises that can be fixed to a certain extent.

It may not be the perfect road bike or even the best mountain bike. It may not even be the best bike for commuting. But even so, with 7 different speeds, good brakes, a pretty solid build and most importantly a folding capability at such an affordable price, the Schwinn Loop Folding Bike is a great option for many of you out there, something you can enjoy riding without too deep a hole in your pockets.